The images from the campus of UC Berkeley were shocking. Young people dressed completely in black causing more than $100,000 in damage to the campus and surrounding businesses. The cause? A protest, apparently highjacked by a few, over the invitation of Milo Yiannopoulos to speak by a student group.

Berkeley has long been the seedbed of classic liberalism, stressing the importance of liberty as a fundamental right. Berkeley was the birthplace of the Free Speech Movement (FSM) that fought for the right to express dissenting opinions, regardless of their popularity. Some Free Speech Movement veterans supported Yiannopoulos right to speak saying that students should oppose him, “nonviolently, in ways that do not prevent such speakers from making or completing their remarks.” 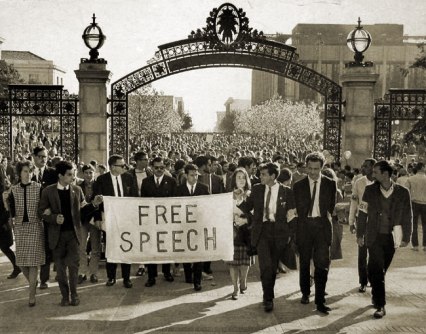 These FSM veterans remember that for which they had fought. The resolution from the Academic Senate in 1964 that, “The content of speech or advocacy should not be restricted by the university” marked their victory. In 1964, they recognized that this would mean there would be views that differed significantly from their own and they embraced it, believing that right to speak freely was tantamount. They tried to underscore this belief in their letter published in The Daily Californian, saying, “Under the terms of that resolution, even the worst kind of bigot, including Yiannopoulos, must be allowed to speak on campus.”

What their grandparents had fought for has been forgotten by some at Berkeley. But not just Berkeley. Free speech is consistently under attack. Every time someone seeks to silence opposition through intimidation or a speaker is uninvited because the content might offend someone, free speech is undermined. What the founders of the FSM at Berkeley recognized, that some of their grandchildren have unfortunately missed, is that denying free speech to one because their ideas are controversial is to undercut the right to freedom of expression for all.

Free speech is such an important right because of its close tie to religious liberty, especially in the First Amendment.

Congress shall make no law respecting an establishment of religion, or profiting the free exercise thereof; or abridging the freedom of speech, or of the press; or the right of the people peaceably to assemble, and to petition the Government for a redress of grievances.

This list of rights within the First Amendment follow a progression, from belief to speech. The founders recognized that the government had no right to tell people what they could or should believe or not believe. To do so would be to undercut liberty at its very core. Similarly, they had the recognized that they had no right to govern the expression of these ideas and beliefs in speech and the press. Liberty cannot exist where people cannot speak or publish freely.

Christians should take a particular interest in this issue because it hits at the heart of our understanding of rights. Our founding fathers, following a Judeo-Christian worldview, did not see themselves as establishing rights for people. Rather, they understood themselves to be recognizing the rights given them by their Creator, those natural or inalienable rights.

We believe, as they did that freedom of speech and freedom of religion are not granted by the government, rather they are recognized and protected by it. Therefore, Christians have the duty to stand and defend those rights from attacks wherever they originate. Whether it be from a foreign government, our own government, or violent protestors dressed in black in Berkeley California.