America has changed. The world into which my children were born is drastically different than the one that into which I was born. This difference grows when we consider the changes that have occurred between my childhood of my parents and my children.

I grew up in the south where everyone was a Christian and was a member of a church, even if they didn’t go to church except for Christmas and Easter. The culture wars were being fought, but cultural Christianity and civic religion still dominated. This society is not the society of my children.

However, our belief in religious liberty, the right of all people to practice their religious convictions without the interference of the state remains the same. But I fear some in my generation, and the ones preceding may have missed a critical component to our understanding of religious liberty.

The hole in our understanding of religious liberty has come to the forefront in the Southern Baptist Convention as the Ethics and Religious Liberty Commission (ERLC) and the International Mission Board (IMB) joined in an amicus brief in federal court. While the ERLC has filed and joined many such briefs in the past, doing so is unique for the IMB. However, the content of the case has many up in arms.

In the case of The Islamic Society of Basking Ridge and Mohammad Ali Chaudry v. 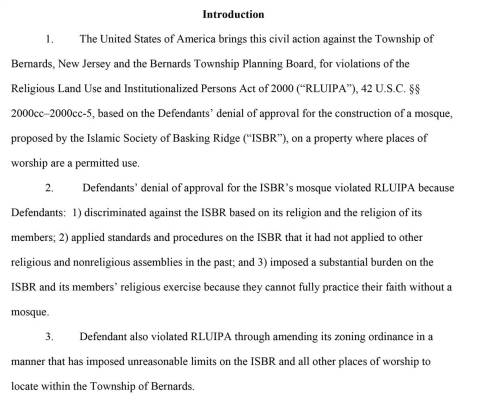 Township of Bernards et al. (Islamic Society v. Bernards), the plaintiffs filed suit claiming that the township discriminated against the society by denying zoning approval for a mosque. While the particulars of the case are important, the huge consequence for Baptists lies not in the case itself, but in the response from some Baptists.

The ERLC and IMB have come under fire for signing the brief because some have claimed that they are directly supporting encouraging the building of mosques. Many have expressed outrage in various ways and various forums. However, the driving force behind the objection appears to be united in a common sentiment: mosques represent a religion antithetically opposed to the Gospel, how can we possibly support building them?

This sentiment, however, misrepresents the amicus brief and the case itself and displays a fundamental misunderstanding of the religious liberty. By signing the amicus brief the ERLC and IMB did not support the building of the mosque. Rather, they joined the brief stating their support for the right of the Islamic Society to build the mosque. I can guarantee that neither Russell Moore, nor David Platt, nor anyone from the ERLC or IMB will give money or resources toward the construction of the mosque. They are supporting the rights of this group to build the mosque following city statutes.

But, more damagingly, many who have so ardently opposed this action have missed a crucial element of our understanding of religious liberty, namely that it extends to all. We believe in religious liberty for Muslims, Jews, Sikhs, Catholics, Wiccan, Baptists, etc. ad infinitum. Moreover, we must once again recognize that an attack on the religious liberty of one is an attack upon the religious liberty of all. Standing by and giving tacit approval to the Township of Bernards would be giving permission to other cities to take similar restrictions on Baptist churches. If the government can make laws about what mosques can be built in New Jersey, they can make laws about what churches can be built in San Francisco.

Perhaps we have fought for our religious liberties as the majority that we have forgotten that our forefathers were once the persecuted religious minority. They recognized that religious liberty must be universal. They realized that it even meant heretics and false religion might flourish. But they embraced it nonetheless.

If we are to rescue religious liberty for our children’s generation, we must once again emphasize the word all. Most of them will never grow up with the illusion that everyone in their class is a member of a church. They will grow up knowing a far more religiously diverse culture. But they must be grounded in the truth of the Gospel and learn to hold firmly to religious liberty in a society that grows increasingly hostile to it day by day.

For those of us transitioning to life in post-Christian America, we should rightly stand for this groups right to build a mosque and rightly pray that its work will be frustrated by the hand of an Almighty God.